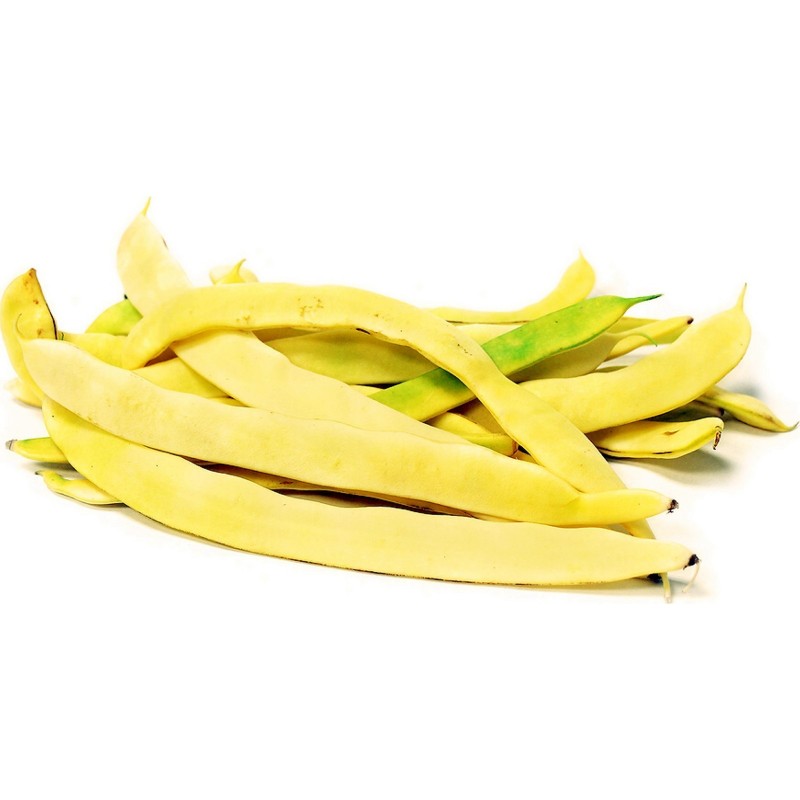 The Marvel of Venice bean is produced on a large climbing vine that creates long slender bean pods. The outer skin of the Marvel of Venice bean ranges from a light to honey yellow color and can be from seven to ten inches in length. Inside it contains petite beans which depending upon variety can be black or white in color. When young the bean pod is edible in its entirety and offers a sweet bean flavor and tender yet meaty texture. Look for fresh beans whose pods are firm and unblemished, beans should be crisp and snap when you break off the tip of the pod.

Marvel of Venice beans are available in the summer and early fall months.

The Marvel of Venice bean, botanically known as part of Phaseolus vulgaris, is a romano type bean and a pole variety that grows in a vining fashion. Romano beans are also further categorized as a European snap bean type and are thought to be a predecessor of the modern snap bean. An heirloom, Italian bean the Marvel of Venice bean is sought after for its superior fresh bean flavor which is rich and buttery. Romano type beans such as Marvel of Venice are unique among other beans and are recognizable by their meaty texture and flattened shape.

Marvel of Venice beans contain a significant amount of vitamin C and also offer some protein, vitamin A, calcium, iron and fiber.

Marvel of Venice beans can be used whole when fresh in both raw and cooked preparations. Additionally, bean pods can be left on the vine to fully mature and dry out then the inner beans removed and utilized as a dried or shelling bean. Marvel of Venice beans can be braised, steamed, simmered, grilled, deep-fried and sautéed. Add lightly cooked or raw beans to salads or serve alongside dips as a crudité. The beans offer a meaty texture when cooked and can stand up to prolonged cooking preparations making them an excellent addition to stews, soups or served braised as a side dish. Their flavor pairs well with tomatoes, garlic, shallots, fennel, lemon, dried red chile, olive oil, balsamic vinegar, fresh herbs, butter, pancetta, hazlenuts, pecorino and parmasean cheese. Beans will keep best if stored in a plastic bag, refrigerated and used within five to seven days.

Also known as Meraviglia di Venezia in its native Italy the Marvel of Venice is classically used there in the tomato sauce based dish, fagiolini al’uccelletto. Romano type beans such as Marvel of Venice are the preferred bean of Italian cuisine and appear in many summer and fall preparations. The Marvel of Venice bean’s popularity extends to France and Spain as well as to Austria and Germany where it is sold under the name Rheingold.

Marvel of Venice beans are an heirloom romano variety bean believed to be native to Italy. Romano type beans are native to southern Europe and are known to be the snap bean of Europe. Be sure to provide adequate support when planting as the Marvel of Venice bean pods grow on vigorous vines that can climb up to seven feet of support trellis or poles. The white seeded variety is known to produce beans earlier in the season than the black seeded type. Like most beans they are not frost tolerant and prefer warm growing conditions with soil temperatures above sixty degrees. Plants can provide significant yields in ideal growing conditions and beans should be harvested frequently to prolong production.
GROWING TIP: All beans and peas are legumes and benefit from "inoculating" with rhizobacteria. These bacteria do the work of taking gaseous nitrogen from the air and "fixing" or concentrating it in pink root nodules which then slough off, adding nitrogen to the soil in a form other plants can take up as a nutrient. Inoculating your beans and peas will increase germination, and the health of your plants, helping them growing large roots and thus healthier plants. Growing pole beans with corn provides an extra shot of nitrogen to the corn, a wonderful natural symbiotic relationship that the Native Americans understood very well. You will see a big difference in overall results. Healthy legumes should also be turned under the soil when production ends as they are excellent green manure for your next crops.