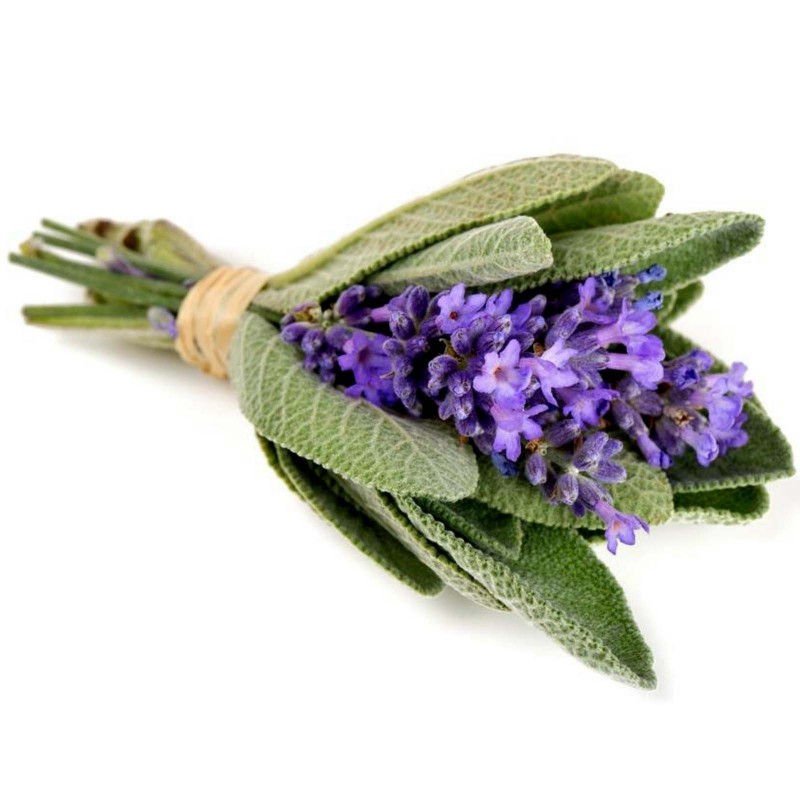 Salvia officinalis (sage, also called garden sage, or common sage) is a perennial, evergreen subshrub, with woody stems, grayish leaves, and blue to purplish flowers. It is a member of the family Lamiaceae and is native

Salvia officinalis (sage, also called garden sage, or common sage) is a perennial, evergreen subshrub, with woody stems, grayish leaves, and blue to purplish flowers. It is a member of the family Lamiaceae and is native to the Mediterranean region, though it has naturalized in many places throughout the world. It has a long history of medicinal and culinary use, and in modern times as an ornamental garden plant. The common name "sage" is also used for a number of related and unrelated species.

Salvia officinalis was described by Carl Linnaeus in 1753. It has been grown for centuries in the Old World for its food and healing properties, and was often described in old herbals for the many miraculous properties attributed to it.[1] The specific epithet, officinalis, refers to the plant's medicinal use—the officina was the traditional storeroom of a monastery where herbs and medicines were stored.[2] S. officinalis has been classified under many other scientific names over the years, including six different names since 1940 alone.
Description
Cultivars are quite variable in size, leaf and flower color, and foliage pattern, with many variegated leaf types. The Old World type grows to approximately 2 ft (0.61 m) tall and wide, with lavender flowers most common, though they can also be white, pink, or purple. The plant flowers in late spring or summer. The leaves are oblong, ranging in size up to 2.5 in (6.4 cm) long by 1 in (2.5 cm) wide. Leaves are grey-green, rugose on the upper side, and nearly white underneath due to the many short soft hairs. Modern cultivars include leaves with purple, rose, cream, and yellow in many variegated combinations.[1]
History
Salvia officinalis has been used since ancient times for warding off evil, snakebites, increasing women's fertility, and more. The Romans likely introduced it to Europe from Egypt as a medicinal herb.[4] Theophrastus wrote about two different sages, a wild undershrub he called sphakos, and a similar cultivated plant he called elelisphakos. Pliny the Elder said the latter plant was called salvia by the Romans, and used as a diuretic, a local anesthetic for the skin, a styptic, and for other uses. Charlemagne recommended the plant for cultivation in the early Middle Ages, and during the Carolingian Empire, it was cultivated in monastery gardens.[4] Walafrid Strabo described it in his poem Hortulus as having a sweet scent and being useful for many human ailments—he went back to the Greek root for the name and called it lelifagus.[5]
The plant had a high reputation throughout the Middle Ages, with many sayings referring to its healing properties and value.[6] It was sometimes called S. salvatrix (sage the savior), and was one of the ingredients of Four Thieves Vinegar, a blend of herbs which was supposed to ward off the plague. Dioscorides, Pliny, and Galen all recommended sage as a diuretic, hemostatic, emmenagogue, and tonic.
Uses
Common sage is grown in parts of Europe for distillation of an essential oil, though other species, such as Salvia fruticosa may also be harvested and distilled with it.
In Britain sage has for generations been listed as one of the essential herbs, along with parsley, rosemary and thyme (as in the folk song "Scarborough Fair"). It has a savoury, slightly peppery flavor. It appears in many European cuisines, notably Italian, Balkan and Middle Eastern cookery. In British and American cooking, it is traditionally served as sage and onion stuffing, an accompaniment to roast turkey or chicken at Christmas or Thanksgiving Day. Other dishes include pork casserole, Sage Derby cheese and Lincolnshire sausages. Despite the common use of traditional and available herbs in French cuisine, sage never found favour there.
Salvia and "sage" are derived from the Latin salvere (to save), referring to the healing properties long attributed to the various Salvia species.[5] It has been recommended at one time or another for virtually every ailment by various herbals. Modern evidence shows possible uses as an antisweating agent, antibiotic, antifungal, astringent, antispasmodic, estrogenic, hypoglycemic, and tonic.[7] In a double blind, randomized and placebo-controlled trial, sage was found to be effective in the management of mild to moderate Alzheimer's disease.[8]
The strongest active constituents of sage are within its essential oil, which contains cineole, borneol, and thujone. Sage leaf contains tannic acid, oleic acid, ursonic acid, ursolic acid, cornsole, cornsolic acid, fumaric acid, chlorogenic acid, caffeic acid, niacin, nicotinamide, flavones, flavonoid glycosides, and estrogenic substances.
Investigations have taken place into using sage as a treatment for Alzheimer's disease patients. Sage leaf extract may be effective and safe in the treatment of hyperlipidemia.
Cultivars
In favourable conditions in the garden, S. officinalis can grow to a substantial size (1 square metre or more), but a number of cultivars are more compact. As such they are valued as small ornamental flowering shrubs, rather than for their herbal properties. Some provide low ground cover, especially in sunny dry environments. Like many herbs they can be killed by a cold wet winter, especially if the soil is not well drained. But they are easily propagated from summer cuttings, and some cultivars are produced from seeds.
Named cultivars include:
'Alba', a white-flowered cultivar
'Aurea', golden sage
'Berggarten', a cultivar with large leaves, which rarely blooms, extending the useful life of the leaves
'Extrakta', has leaves with higher oil concentrations
'Icterina', a cultivar with yellow-green variegated leaves
'Lavandulaefolia', a small leaved cultivar
'Purpurascens' ('Purpurea'), a purple-leafed cultivar
'Tricolor', a cultivar with white, yellow and green variegated leaves
'Icterina'[13] and 'Purpurascens'[14] have gained the Royal Horticultural Society's Award of Garden Merit.
VE 194 (1g)
1280 Items