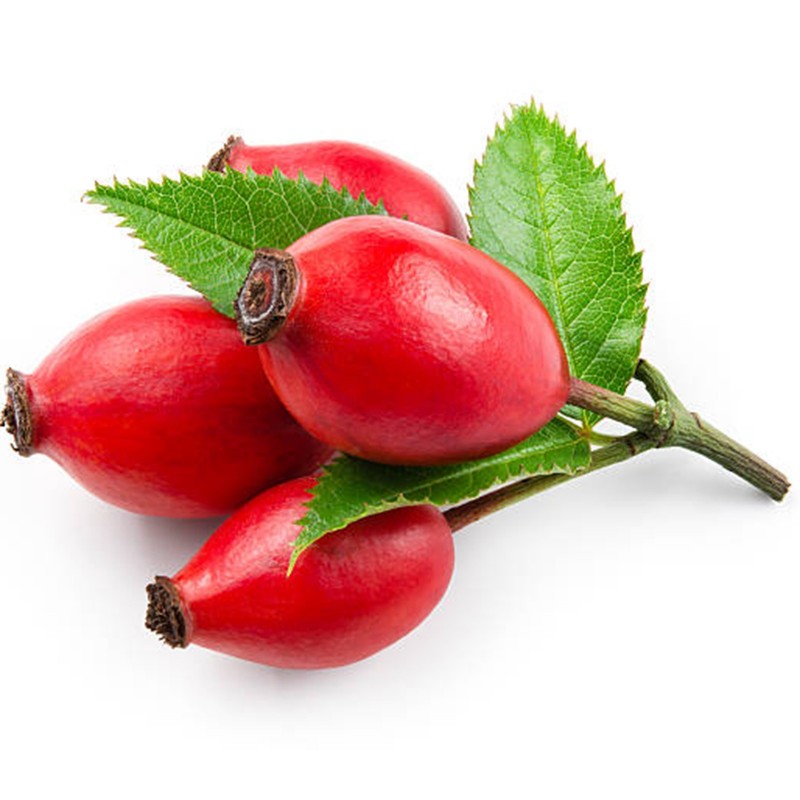 The rosehip, also known as rose haw or rose hep, is the fruit of the rose plant, that typically is red-to-orange, but ranges from dark purple to black in some species.

The rose hip, also known as rose haw or rose hep, is the fruit of the rose plant, that typically is red-to-orange, but ranges from dark purple to black in some species. Rose hips begin to form after successful pollination of flowers in spring or early summer and ripen in late summer through autumn.

Rose hips are used for tisanes, jam, jelly, syrup, soup, beverages, pies, bread, wine, and marmalade. They can also be eaten raw, like a berry, if care is used to avoid the hairs inside the fruit.

A few rose species are sometimes grown for the ornamental value of their hips, such as Rosa moyesii, which has prominent large red bottle-shaped fruits.

Rose hips have recently[when?] become popular as a healthy treat for pet chinchillas and guinea pigs. These small rodents are unable to manufacture their own vitamin C and are unable to digest many vitamin-C rich foods. Rose hips provide a sugarless, safe way to increase their vitamin C intake.

Rose hips are also fed to horses. The dried and powdered form can be fed at a maximum of 1 tablespoon per day to improve coat condition and new hoof growth.

Rose hips were used in many food preparations by the indigenous peoples of the Americas.

Rose hips can be used to make Palinka, a traditional Hungarian alcoholic beverage. They are also the central ingredient of Cockta, the fruity-tasting national soft drink of Slovenia.

In his book Stalking the Faraway Places, wild foods enthusiast Euell Gibbons recommended stuffed rose hips made by slicing a large hip in half, removing the seeds and inserting a wild raspberry.

Rose hips are commonly used as a tisane, often blended with hibiscus, and also as an oil. They can also be used to make jam, jelly, marmalade, and rose hip wine. Rose hip soup, "nyponsoppa", is especially popular in Sweden. Rhodomel, a type of mead, is made with rose hips.

Rose hips are particularly high in vitamin C content, one of the richest plant sources available. However, RP-HPLC assays of fresh rose hips and several commercially available products revealed a wide range of L-ascorbic acid content, ranging from 0.03 to 1.3%.[2] Rose hips of some species, especially Rosa canina (Dog Rose) and R. majalis, have been used as a source of vitamin C. During World War II, the people of Britain were encouraged through letters to The Times newspaper, articles in the British Medical Journal, and pamphlets produced by Claire Loewenfeld, a dietitian working for Great Ormond Street Hospital for Sick Children, to gather wild-grown rose hips and to make a vitamin C syrup for children. This was because German submarines were sinking many commercial ships: citrus fruits from the tropics were very difficult to import.

Rose hips contain plenty of lycopene, an important and strong antioxidant that prevents oxidation of low density lipoprotein (LDL) as well as of many cellular membranes.[3] Lycopene in rose hips differs more in its isomer distribution than in other sources (tomatoes, pink grapefruit).[citation needed]

Rose hips also contain some vitamin A and B, essential fatty acids, and antioxidant flavonoids.

A study of a rose hip preparation for treating rheumatoid arthritis concluded that there was a benefit, apparently due to both anti-inflammatory and anti-oxidant effects.

Rose hips are used to help prevent colds and influenza.

Roses are propagated from hips by removing the achenes that contain the seeds from the hypanthium (the outer coating) and sowing just beneath the surface of the soil. The seeds can take many months to germinate. Most species require chilling (stratification), with some such as Rosa canina only germinating after two winter chill periods have occurred.