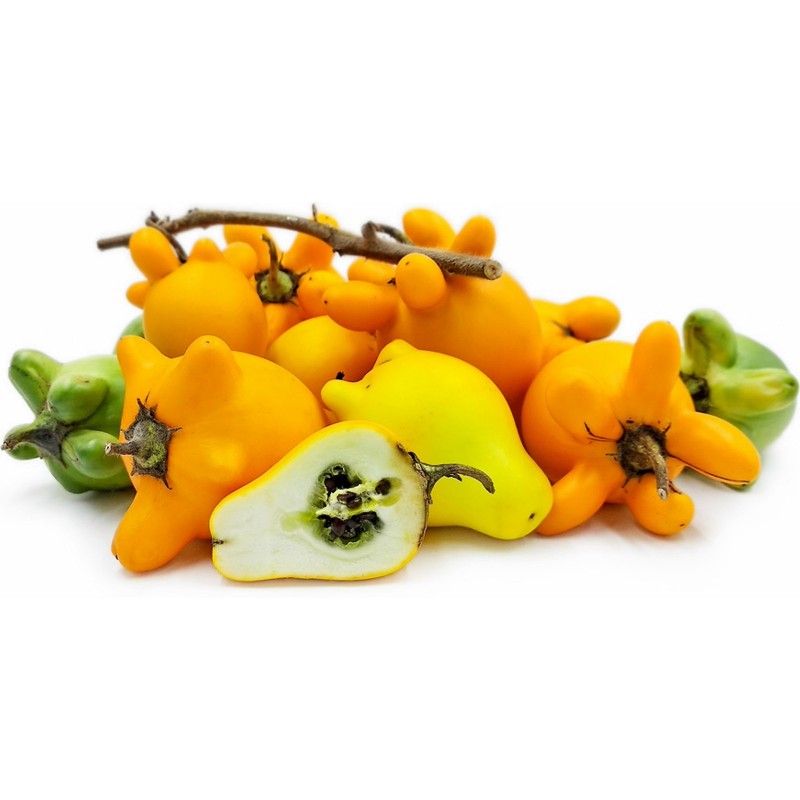 This ornamental fruit is native to the lowlands of Ecuador and is often imported to other areas of the world for its decorative purposes.  The fruits are poisonous. It is part of the nightshade (solamum) genus and gains its name due

Solanum mammosum is commonly known as nipplefruit,[1] fox head,[2] cow's udder, or apple of Sodom, is an inedible Pan-American tropical fruit.[3] The plant is grown for ornamental purposes, in part because of the distal end of the fruit's resemblance to a human breast, while the proximal end looks like a cow's udder. It is an annual in the family Solanaceae, and part of the genus Solanum, making the plant a relative of the eggplant, tomato, and potato. This poisonous fruit is native to South America, but has been naturalized in Southern Mexico, Greater Antilles, Central America, and the Caribbean. The plant adapts well to most soils, but thrives in moist, loamy soil. 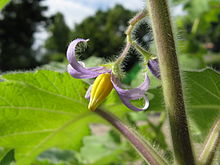 The plant has thin simple leaves occurring in alternating branching patterns with prominent venation. Hairy thorns cover the stem and branches of the plant. The inflorescencecontains five to eight purple elongating buds. The fruit is a berry type, and has waxy yellow skin with reddish-brown seeds. The plant is propagated by the distribution of seeds. 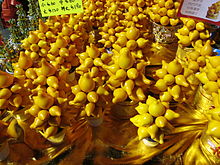 Folkloric uses of the plant range from treating asthma with a root decoction, to curing athlete's foot by rubbing leaf juices on the skin.[citation needed] Although these medical uses are not widely practiced and vary through cultures, they are an explanation for why this plant has been cultivated.

The fruit has been embraced by Eastern cultures. It is primarily used as decorative foliage for religious and festival floral arrangements in Asia. The fruit is imported for the creation of Chinese New Year trees, due to their golden colored fruit and the belief that the five "fingers" on the fruit represent longevity for the family. In Chinese culture, the plant is known as five fingered eggplant (五指茄) and in Japan it is known as Fox Face (フォックスフェイス).

The juice of the fruit can be used as a detergent in place of a washing powder, making it similar to the soap nut. The Kofan People of Columbia and Ecuador use the plant as an insect repellent, primarily against cockroaches. The fruit works as a repellent because of the toxicity of steroidal glycoalkaloid.[4]

Although the fruit is poisonous, it can be cooked and eaten like a vegetable when it is unripe.[citation needed] It provides a good source of calcium, phosphorus, iron and vitamin B.[4]One way that the fruit can be prepared is boiling the whole fruit and drinking the juices once boiled. In the Philippines, not only is the fruit eaten, but the leaves are also prepared as a tea considered to be anodyne,[citation needed] a mild narcotic.