This plant is edible 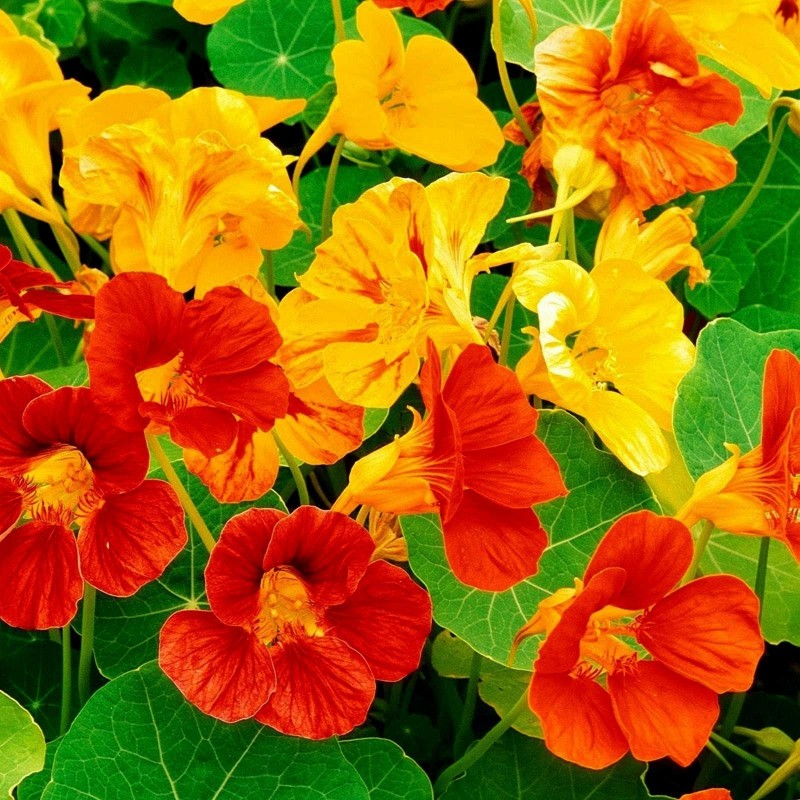 Tropaeolum majus (garden nasturtium, Indian cress or monks cress) is a flowering plant in the family Tropaeolaceae, originating in the Andes from Bolivia north to Colombia. The species has become

Tropaeolum majus (garden nasturtium, Indian cress or monks cress) is a flowering plant in the family Tropaeolaceae, originating in the Andes from Bolivia north to Colombia. The species has become naturalized in parts of the United States (California, New York, Pennsylvania, New Hampshire, Massachusetts and Connecticut).[3] It is of cultivated, probably hybrid origin, with possible parent species including T. minus, T. moritzianum, T. peltophorum, and T. peregrinum.[4][5] It is not closely related to the genus Nasturtium (which includes watercress).

It is a herbaceous annual plant with trailing stems growing to 1 metre (3 ft 3 in) long or more. The leaves are large, nearly circular, 3 to 15 centimetres (1.2 to 5.9 in) diameter, green to glaucous green above, paler below; they are peltate, with the 5–30 cm long petiole near the middle of the leaf, with several veins radiating to the smoothly rounded or slightly lobed margin. The flowers are 2.5–6 cm diameter, with five petals, eight stamens, and a 2.5–3 cm long nectar spur at the rear; they vary from yellow to orange to red, frilled and often darker at the base of the petals. The fruit is 2 cm broad, three-segmented, each segment with a single large seed 1–1.5 cm long.

Das Elisabeth Linné-Phänomen, or the Elizabeth Linnæus Phenomenon, is the name given to the phenomenon of "Flashing Flowers".[8] Especially at dusk, the orange flowers may appear to emit small "flashes". Once believed to be an electrical phenomenon, it is today thought to be an optical reaction in the human eye caused by the contrast between the orange flowers and the surrounding green. The phenomenon is named after Elisabeth Christina von Linné, one of Carl Linnaeus's daughters, who discovered it at age 19.

It is widely cultivated, both as an ornamental plant and as a medicinal plant.

It is listed as invasive in several areas, including Hawaii, Lord Howe Island, New Zealand.

All its parts are edible. The flower has most often been consumed, making for an especially ornamental salad ingredient; it has a slightly peppery taste reminiscent of watercress, and is also used in stir fry. The flowers contain about 130 mg vitamin C per 100 grams (3.5 oz),[10] about the same amount as is contained in parsley.[11] Moreover, they contain up to 45 mg of lutein per 100 gr,[12] which is the highest amount found in any edible plant. The unripe seed pods can be harvested and dropped into spiced vinegar to produce a condiment and garnish, sometimes used in place of capers.

The garden nasturtium is used as a food plant by the larvae of some Lepidoptera species including the Dot Moth[14] and the Garden Carpet Moth.[15] A very common pest found on nasturtiums is the caterpillar of the Large White (Cabbage White) Butterfly.

Nasturtiums are also considered widely useful companion plants. They repel a great many cucurbit pests, like squash bugs, cucumber beetles, and several caterpillars. They have a similar range of benefits for brassica plants, especially broccoli and cauliflower. They also serve as a trap crop against black fly aphids. They also attract beneficial predatory insects.