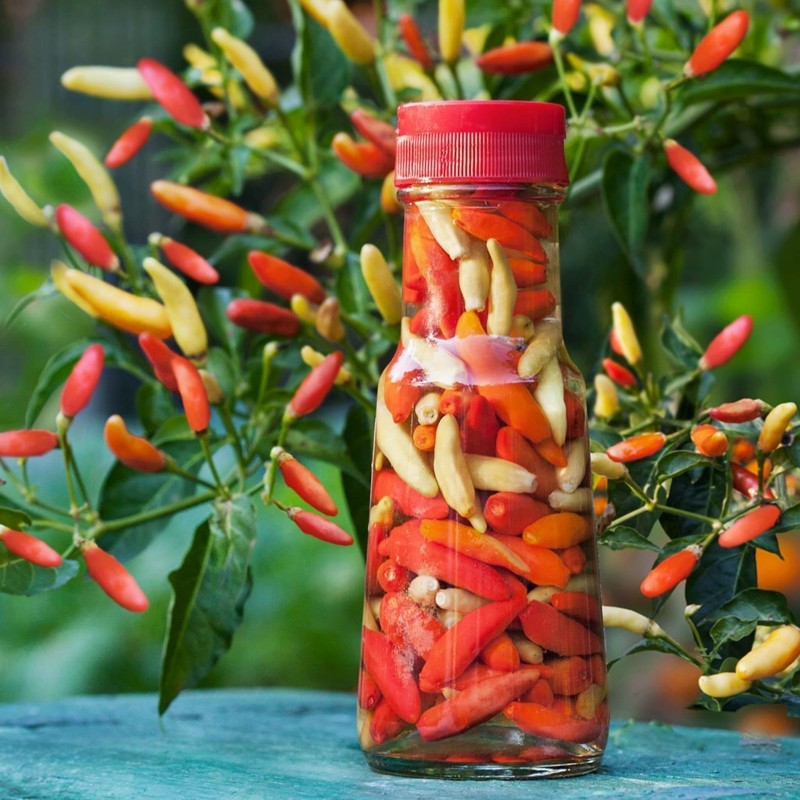 The tabasco pepper is a variety of chili pepper species Capsicum frutescens with its origins in Mexico. It is best known through its use in Tabasco sauce, followed by peppered vinegar.

The tabasco pepper is a variety of chili pepper species Capsicum frutescens with its origins in Mexico. It is best known through its use in Tabasco sauce, followed by peppered vinegar.

Like all C. frutescens cultivars, the tabasco plant has a typical bushy growth, which commercial cultivation makes stronger by trimming the plants. The tapered fruits, around 4 cm long, are initially pale yellowish-green and turn yellow and orange before ripening to bright red. Tabascos rate from 30,000 to 50,000 on the Scoville scale of heat levels, and are the only variety of chili pepper whose fruits are "juicy"; i.e., they are not dry on the inside. Tabasco fruits, like all other members of the C. frutescens species remain upright when mature, rather than hanging down from their stems.

A large part of the tabasco pepper stock fell victim to the tobacco mosaic virus in the 1960s; the first resistant variety (Greenleaf tabasco) was not cultivated until around 1970.

Tabasco peppers start out green and as they ripen, turn orange and then red. It takes approximately 80 days after germinating for them to become fully mature. The tabasco plant can grow to 1.5 m (60 in) tall, with a cream or light yellow flower that will develop into upward oriented fruits later in the growing season. As they are native to the Mexican state of Tabasco, seeds require lots of warmth to germinate and grow best when the temperature is between 25–30 °C (77–86 °F). If grown outside of their natural habitat, the peppers are planted 2 to 3 weeks after the last frost when the soil temperatures exceed 10 °C (50 °F) and the weather has settled. Peppers are temperamental when it comes to setting fruit if temperatures are too hot or too cool and even if nighttime temperatures fall below 15 °C (60 °F) it can reduce fruit set. A location that receives plenty of light and heat, with soil that is fertile, lightweight, slightly acidic (pH 5.5–7.0) and well-drained is ideal for growing the plants. Peppers need a steady supply of water for best performance. Growers are careful to make sure that fertilizers and soil are rich in phosphorus, potassium and calcium and reduced in nitrogen as it can deter fruit growth.