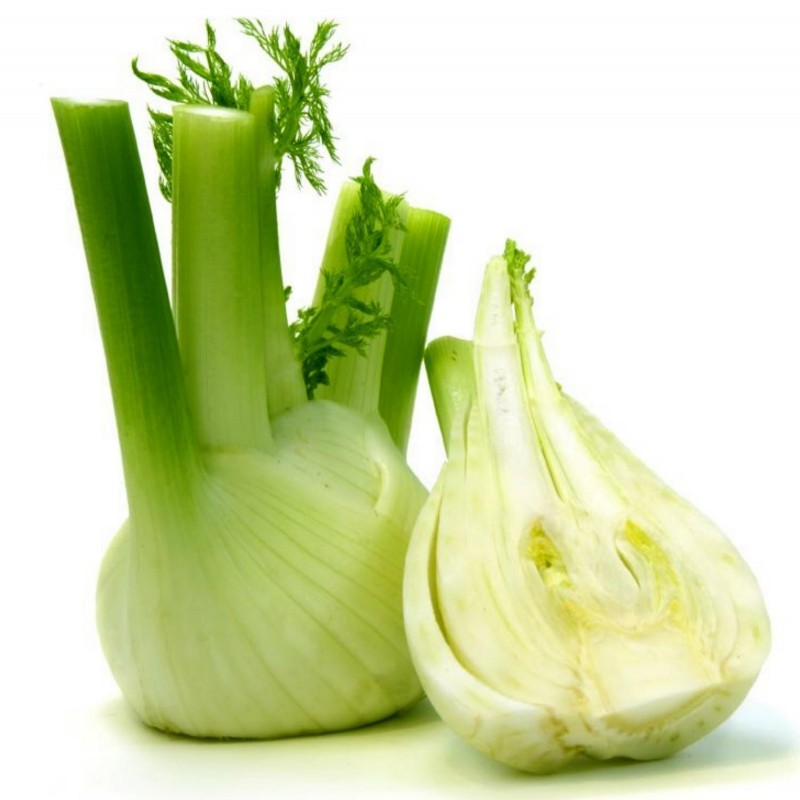 Fennel (Foeniculum vulgare) is a plant species in the genus Foeniculum (treated as the sole species in the genus by most botanists). It is a member of the family Apiaceae (formerly the Umbelliferae). It is a hardy, perennial, umbelliferous herb, with yellow flowers and feathery leaves. It is indigenous to the shores of the Mediterranean but has become widely naturalized in many parts of the world, especially on dry soils near the sea-coast and on riverbanks.

It is a highly aromatic and flavorful herb with culinary and medicinal uses and, along with the similar-tasting anise, is one of the primary ingredients of absinthe. Florence fennel or finocchio is a selection with a swollen, bulb-like stem base that is used as a vegetable.

Fennel is used as a food plant by the larvae of some Lepidoptera species including the mouse moth and the anise swallowtail.

The word "fennel" developed from the Middle English fenel or fenyl. This came from the Old English fenol or finol, which in turn came from the Latin feniculum or foeniculum, the diminutive of fenum or faenum, meaning "hay". The Latin word for the plant was ferula, which is now used as the genus name of a related plant.

As Old English finule, fennel is one of the nine plants invoked in the pagan Anglo-Saxon Nine Herbs Charm, recorded in the 10th century.

In Greek mythology, Prometheus used the stalk of a fennel plant to steal fire from the gods. Also, it was from the giant fennel, Ferula communis, that the Bacchanalian wands of the god Dionysus and his followers were said to have come.

The Greek name for fennel is a marathon (μάραθον) or marathos (μάραθος),[3] and the place of the famous battle of Marathon and the subsequent sports event Marathon (Μαραθών), literally means a plain with fennels.

Fennel, Foeniculum vulgare, is a perennial herb. It is erect, glaucous green, and grows to heights of up to 2.5 m, with hollow stems. The leaves grow up to 40 cm long; they are finely dissected, with the ultimate segments filiform (threadlike), about 0.5 mm wide. (Its leaves are similar to those of dill but thinner.) The flowers are produced in terminal compound umbels 5–15 cm wide, each umbel section having 20–50 tiny yellow flowers on short pedicels. The fruit is a dry seed from 4–10 mm long, half as wide or less, and grooved.

Fennel is widely cultivated, both in its native range and elsewhere, for its edible, strongly flavored leaves and fruits. Its aniseed flavour comes from anethole, an aromatic compound also found in anise and star anise, and its taste and aroma are similar to theirs, though usually not as strong.

The Florence fennel (Foeniculum vulgare Azoricum Group; syn. F. vulgare var. azoricum) is a cultivar group with inflated leaf bases which form a bulb-like structure. It is of cultivated origin,[7] and has a mild anise-like flavor, but is more aromatic and sweeter. Florence fennel plants are smaller than the wild type.[citation needed] Their inflated leaf bases are eaten as a vegetable, both raw and cooked. There are several cultivars of Florence fennel, which is also known by several other names, notably the Italian name finocchio. In North American supermarkets, it is often mislabelled as "anise".

Fennel has become naturalized along roadsides, in pastures, and in other open sites in many regions, including northern Europe, the United States, southern Canada and in much of Asia and Australia. It propagates well by seed and is considered an invasive species and a weed in Australia and the United States.[11] In western North America, fennel can be found from the coastal and inland wildland-urban interface east into hill and mountain areas, excluding desert habitats.

Florence fennel is one of the three main herbs used in the preparation of absinthe, an alcoholic mixture which originated as a medicinal elixir in Switzerland and became, by the late 19th century, a popular alcoholic drink in France and other countries.

Sugar-coated and un-coated fennel seeds are used in India and Pakistan in mukhwas, an after-meal snack and breath freshener.

The bulb, foliage, and seeds of the fennel plant are widely used in many of the culinary traditions of the world. The small flowers of wild fennel (mistakenly known in America as fennel "pollen" [12]) are the most potent form of fennel, but also the most expensive.[13] Dried fennel seed is an aromatic, anise-flavored spice, brown or green in color when fresh, slowly turning a dull grey as the seed ages. For cooking, green seeds are optimal.[6] The leaves are delicately flavored and similar in shape to those of dill. The bulb is a crisp vegetable that can be sautéed, stewed, braised, grilled, or eaten raw. They are used for garnishes and to add flavor to salads. They are also added to sauces and served with pudding. The leaves used in soups and fish sauce and sometimes eaten raw as a salad.

Fennel seeds are sometimes confused with those of anise, which are similar in taste and appearance, though smaller. Fennel is also used as a flavoring in some natural toothpaste. The seeds are used in cookery and sweet desserts.

Many cultures in India, Pakistan, Afghanistan, Iran, and the Middle East use fennel seed in their cookery. It is one of the most important spices in Kashmiri Pandit and Gujarati cooking.[15] It is an essential ingredient of the Assamese/Bengali/Oriya spice mixture panch phoron[16] and in Chinese five-spice powders. In many parts of India and Pakistan, roasted fennel seeds are consumed as mukhwas, an after-meal digestive and breath freshener. Fennel leaves are used as leafy green vegetables either by themselves or mixed with other vegetables, cooked to be served and consumed as part of a meal, in some parts of India. In Syria and Lebanon, it is used to make a special kind of egg omelette (along with onions, and flour) called ijjeh.

Many egg, fish, and other dishes employ fresh or dried fennel leaves. Florence fennel is a key ingredient in some Italian and German salads, often tossed with chicory and avocado, or it can be braised and served as a warm side dish. It may be blanched or marinated, or cooked in risotto.

In Spain the stems of the fennel plant are used in the preparation of pickled eggplants, "berenjenas de Almagro".

Fennel contains anethole, which can explain some of its medical effects: It, or its polymers, act as phytoestrogens.

The essence of fennel can be used as a safe and effective herbal drug for primary dysmenorrhea, but could have lower potency than mefenamic acid at the current study level.

Fennel is widely employed as a carminative, both in humans and in veterinary medicine (e.g., dogs), to treat flatulence by encouraging the expulsion of intestinal gas. Anethole is responsible for the carminative action.

On account of its carminative properties, fennel is chiefly used medicinally with purgatives to allay their side effects, and for this purpose forms one of the ingredients of the well-known compound licorice powder. Fennel water has properties similar to those of anise and dill water: mixed with sodium bicarbonate and syrup, these waters constitute the domestic 'gripe water' used to correct the flatulence of infants. The volatile oil of fennel has these properties in concentration. Commercial preparations of fennel [1] are widely available as an alternative treatment for baby colic.

Fennel tea, also employed as a carminative, is made by pouring boiling water on a teaspoonful of bruised fennel seeds.

Fennel can be made into a syrup to treat babies with colic (formerly thought to be due to digestive upset), but long-term ingestion of fennel preparations by babies is a known cause of thelarche.

In the Indian subcontinent, fennel seeds are also eaten raw, sometimes with some sweetener, as they are said to improve eyesight. Ancient Romans regarded fennel as the herb of sight.[21] Root extracts were often used in tonics to clear cloudy eyes. Extracts of fennel seed have been shown in animal studies to have potential use in the treatment of glaucoma.

Fennel may be an effective diuretic and a potential drug for the treatment of hypertension.

There are historical anecdotes that fennel is a galactagogue,[25] improving the milk supply of a breastfeeding mother. This use, although not supported by direct evidence, is sometimes justified by the fact that fennel is a source of phytoestrogens, which promote the growth of breast tissue. However, normal lactation does not involve growth of breast tissue. A single case report of fennel tea ingested by a breastfeeding mother resulted in neurotoxicity for the newborn child.

Syrup prepared from fennel juice was formerly given for chronic coughs. It is one of the plants which is said to be disliked by fleas, and powdered fennel has the effect of driving away fleas from kennels and stables.

Constituents:  the essential oil is made up predominantly of anethole (50 to 80%), limonene, fenchone, and estragole. the seeds also contain fiber and complex carbohydrates.

Fennel also acts as an excellent digestive aid to relieve abdominal cramps, gas and bloating. The fresh stems of fennel can be eaten much like celery, the seeds add a lovely anise flavor to fish and other dishes. If you expect to eat a vegetable that you have trouble digesting, like cabbage, try adding fennel seeds to your recipe.

The Greek name for fennel was marathon was derived from "maraino", to grow thin, reflecting the widely held belief that fennel affected weight loss, a belief that was echoed by William Coles, in "Nature's Paradise"

both the seeds, leaves, and root of Garden Fennel are much used in drinks and broths for those that are grown fat, to abate their unwieldiness and cause them to grow more gaunt and lank.

Fennel's ancient reputation as a weight loss aid still holds up today. Drinking a cup of fennel seed tea 15 minutes before eating a heavy meal seems to take the edge off your appetite. Fennel also tunes up digestion, helping to turn food into energy instead of fat.

Women who are going through menopause or are experiencing menstrual problems may benefit from the estrogenic properties of fennel. It has a balancing effect on the female reproductive system and increases the flow of body energy. Extracts of fennel have estrogenic properties that may benefit women going through the hormonal imbalances caused by menopause.

Sow fennel seed directly into the ground in spring when the ground is warm and thin plants to 12-18 inches. Plants can also be propagated by division in spring. Fennel prefers moist but well-drained soil with a pH between 4.8 and 8.2.