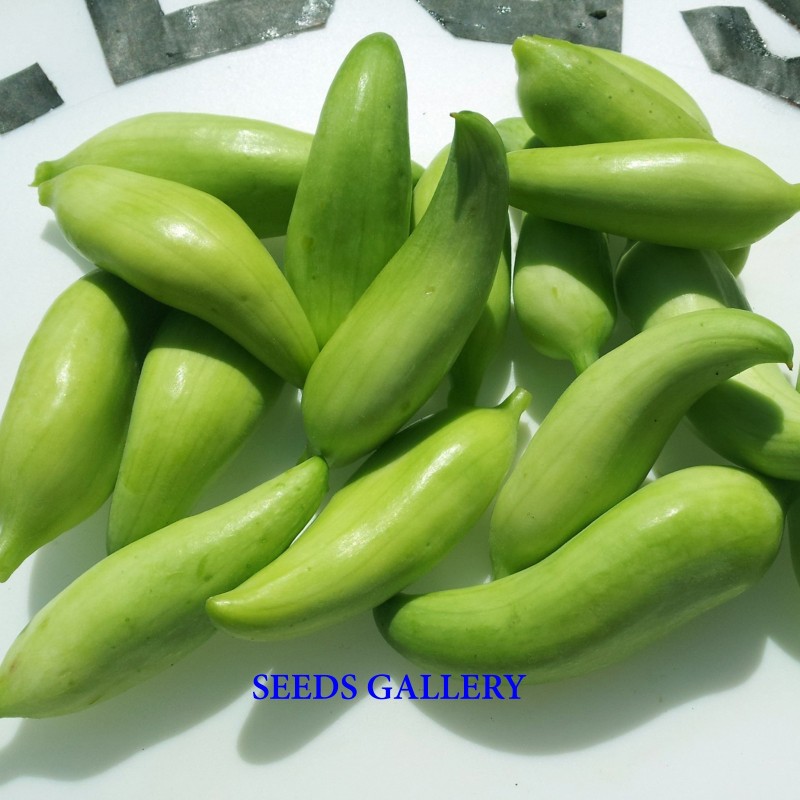 As every year so far, we have sown this beautiful and healthy plant again and the yield was excellent. Many wonder if this plant can thrive in their climate? Yes, if you can grow an ordinary cucumber, then this plant will also grow well in your climate. We have to add that it grows and expands very quickly, and it is great for a pergola, within a month it will expand over 3 meters in length and create great shade.

Well-known in the tropics and hotter countries, this herbaceous vine is grown for its edible fruit, which is predominantly used as a vegetable. It is known from cultivation only, and its large size, compared to closely related wild species, suggests that it is a fully domesticated crop going back for many centuries, evidence coming from ancient Peruvian ceramics depicting the fruits. The fully grown but still immature fruits are usually eaten cooked, as well as use in salads and pickles.

For best results, sow seeds in good light at any time onto a good soil-based compost. Cover the seeds with fine grit or compost to approximately their own depth. We recommend germinating at 15 to 20 degrees C. Seeds should ideally germinate in between 2 and 6 weeks although they make take considerably longer. Pot on seedlings before finally planting out into a container or a well-drained spot.

Cyclanthera pedata, locally known by its Quechua names kaywa (pronounced kai-wa, hispanicized spellings caigua, caihua, caygua, cayua) or achuqcha (also spelled achocha, achogcha, achojcha, achokcha), is a herbaceous vine grown for its edible mature fruit, which is predominantly used as a vegetable. Kaywa is known from cultivation only, and its large fruit size as compared to closely related wild species suggests that it is a fully domesticated crop. Its use goes back many centuries as evidenced by ancient phytomorphic ceramics from Peru depicting the fruits. It is also known as slipper gourd, lady's slipper, sparrow gourd (Chinese: 小雀瓜; pinyin: xiǎoquè guā), pepino in Colombia, stuffing cucumber in English, korila in the Philippines, and olochoto and kichipoktho in Bhutan. It is also called chuche karela in Nepal and Southern Bhutan.

Domesticated in the Andes and traditionally distributed from Colombia to Bolivia, the kaywa is now grown in many parts of Central America and also in parts of the Eastern Hemisphere tropics. For example, kaywa is very popular in northeastern India, Nepal and Bhutan. The Moche culture had a fascination with agriculture and displayed this in their art. The kaywa was often depicted in their ceramics.

Typically, the fully grown, mature fruits are eaten cooked, raw in salads, and pickled. The kaywa has a subtle flavour similar to cucumber. The fruit has a large cavity in which the seeds develop, and this can be filled with other foods to make kaywa dishes. This may have inspired the local Spanish name pepino de rellenar ("stuffing cucumber"). The young shoots and leaves may also be eaten as greens.