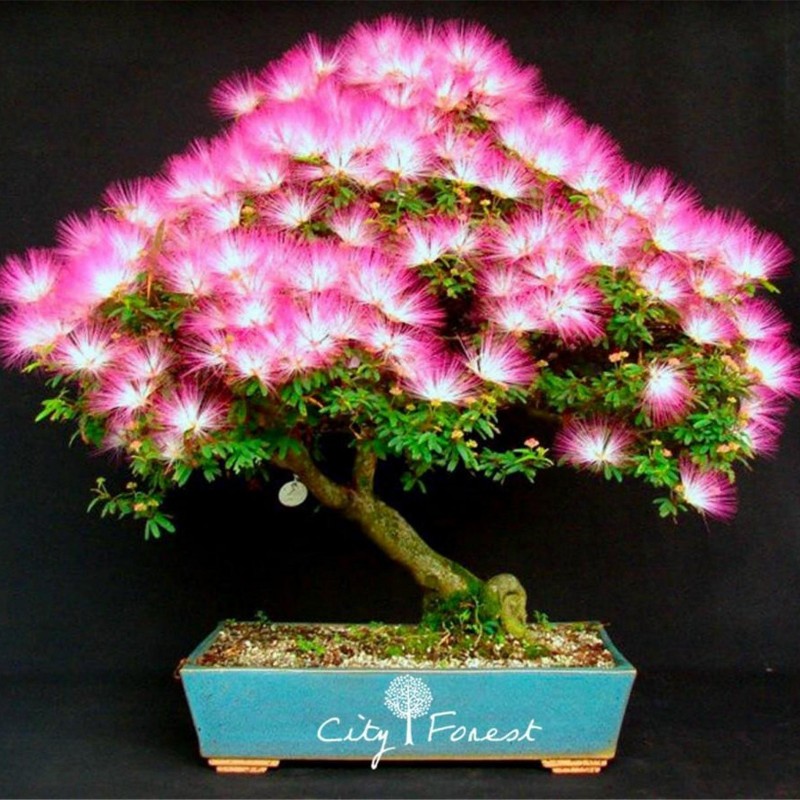 The genus is named after the Italian nobleman Filippo degli Albizzi, who introduced it to Europe in the mid-18th century, and it is sometimes incorrectly spelled Albizzia. The specific epithet julibrissin is a corruption of the Persian word gul-i abrisham (گل ابریشم) which means "silk flower" (from gul گل "flower" + abrisham ابریشم "silk").

Albizia julibrissin is known by a wide variety of common names, such as Persian silk tree or pink siris. It is also called Lenkoran acacia or bastard tamarind, though it is not too closely related to either genus. The species is usually called "silk tree" or "mimosa" in the United States, which is misleading - the former name can refer to any species of Albizia which is most common in any one locale. And, although once included in Mimosa, neither is it very close to the Mimoseae. To add to the confusion, several species of Acacia, notably Acacia baileyana and Acacia dealbata, are also known as "mimosa" (especially in floristry), and many Fabaceae trees with highly divided leaves are called thus in horticulture.

Its leaves slowly close during the night and during periods of rain, the leaflets bowing downward; thus its modern Persian name shabkhosb (شب‌خسب) means "night sleeper" (from shab شب‌ "night" and -khosb خسب "sleeper"). In Japan its common names are nemunoki, nemurinoki and nenenoki which all mean "sleeping tree". Nemu tree is a partial translation of nemunoki.

A. julibrissin is a small deciduous tree growing to 5–12 m tall, with a broad crown of level or arching branches. The bark is dark greenish grey in colour and striped vertically as it gets older. The leaves are bipinnate, 20–45 cm long and 12–25 cm broad, divided into 6–12 pairs of pinnae, each with 20–30 pairs of leaflets; the leaflets are oblong, 1–1.5 cm long and 2–4 mm broad. The flowers are produced throughout the summer in dense inflorescences, the individual flowers with small calyx and corola (except the central ones), and a tight cluster of stamens 2–3 cm long, white or pink with a white base, looking like silky threads. They have been observed to be attractive to bees, butterflies and hummingbirds. The fruit is a flat brown pod 10–20 cm long and 2–2.5 cm broad, containing several seeds inside.

A. julibrissin is widely planted as an ornamental plant in parks and gardens, grown for its leaf texture and flowers. The broad crown of a mature tree makes it useful for providing dappled shade. The flower colour varies from white in A. julibrissin f. alba, to rich red-tipped flowers. Variants with cream or pale yellow flowers are also reported. Other cultivars are becoming available: 'Summer Chocolate' has red foliage ageing to dark bronze, with pale pink flowers; 'Ishii Weeping' (or 'Pendula') has a drooping growth habit.

The seeds are used as a food for livestock and by wildlife, and the sweet-scented flowers are a good nectar source for honeybees and butterflies.

Extracts of A. julibrissin has been found to possess antidepressant effects in mice in high doses, most likely mediated through 5-HT1A receptors.[4] In traditional Chinese medicine Albizzia jublibrissin (合歡花 Hé Huān Huā) is used to nourish the heart and calm the spirit.

In the wild, the tree tends to grow in dry plains, sandy valleys, and uplands. It has become an invasive species in Japan; and in the United States it has spread from southern New York, New Jersey and Connecticut, west to Missouri and Illinois, and south to Florida and Texas. It is cultivated in California and Oregon.

This tree is allelopathic to its neighbors and undergrowth (although Miner's Lettuce seems to thrive in its shadow in cool moist climates). Its seeds are numerous and they are fertile even over long periods of drought. Each pod, which resemble a flattened bean pod made of paper, contains an average of 8 seeds. The pods burst in strong winds, and the seeds carry over surprisingly long distances.

Breeding work is currently under way in the United States to produce ornamental plants which will not set seed and can therefore be planted without risk. However, in the eastern United States it is generally a short-lived tree, being highly susceptible to mimosa vascular wilt,[8] a fungal disease caused by a species of Fusarium, though the disease does not seem to have seriously impacted its populations. Because of its invasive tendencies and disease susceptibility, it is rarely recommended as an ornamental plant in the US, though it is still widely planted in parts of Europe.