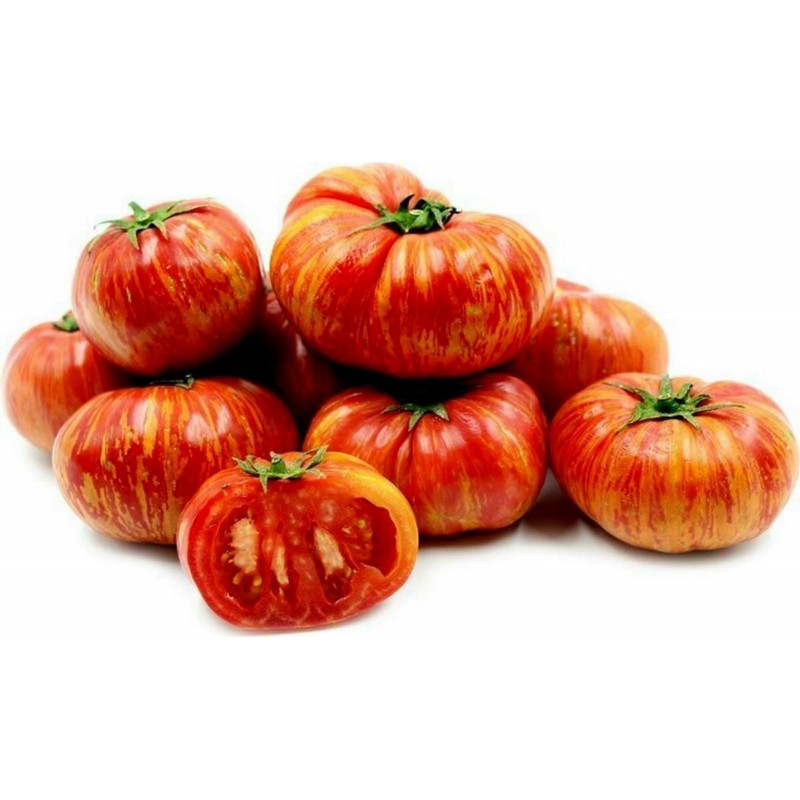 Tigerella heirloom tomatoes were developed in the 1950s by Dr. Lewis Darby of Great Britain, maybe. Other sources state thatTigerella tomato seeds were bred by the Glasshouse Research Institute in England

Tigerella is a bi-colored tomato cultivar, relatively small, 2 to 4 ounces (60-120 g), and early (59 days). Upon maturity, the fruit is red with yellow stripes, essentially the same as Green Zebra, except that the fruit is red instead of green, and has a sweeter flavor.

Tigerella heirloom tomatoes were developed in the 1950s by Dr. Lewis Darby of Great Britain, maybe. Other sources state that Tigerella tomato seeds were bred by the Glasshouse Research Institute in England in the 1930s as a cross between an unknown cultivar and Ailsa Craig.

A stunning Heirloom standard-sized round variety with red-orange skin and golden-green to yellow jagged stripes. It crops reliably and heavily up to 3 Weeks earlier than Moneymaker and grows well outdoors or in a greenhouse in all areas with a rich, tangy flavor. Cordon (Indeterminate).

Determinate tomatoes, or "bush" tomatoes, are varieties that grow to a compact height (generally 3 - 4'). Determinates stop growing when fruit sets on the top bud. All the tomatoes from the plant ripen at approximately the same time (usually over a period of 1- 2 weeks). They require a limited amount of staking for support and are perfectly suited for container planting.

Indeterminate tomatoes will grow and produce fruit until killed by frost. They can reach heights of up to 12 feet although 6 feet is normal.  Indeterminates will bloom, set new fruit and ripen fruit all at the same time throughout the season. They require substantial staking for support and benefit from being constrained to a central growing stem.