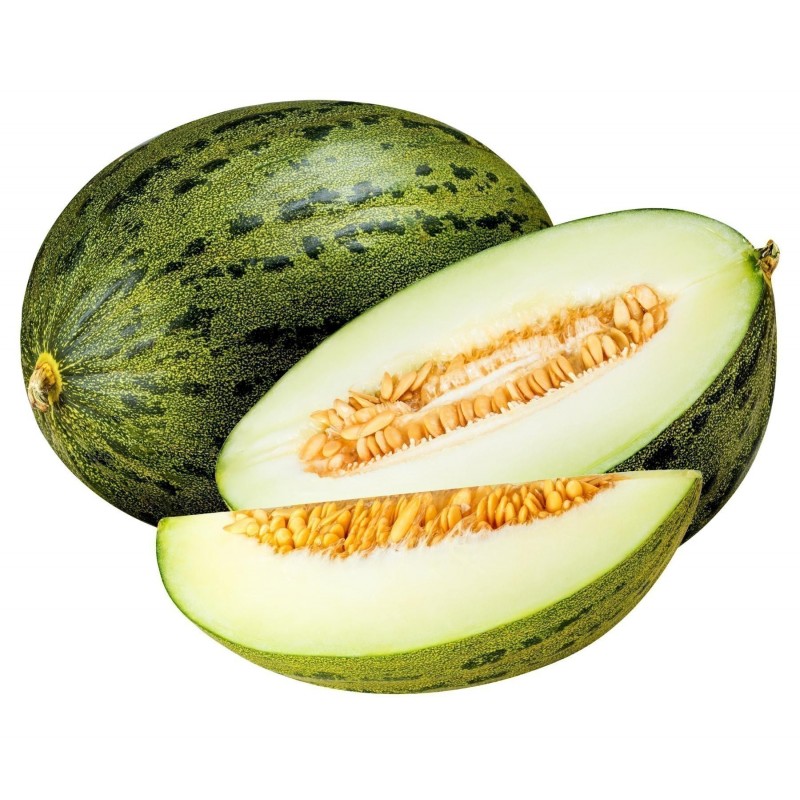 Piel de Sapo. Commonly known and marketed as Santa Claus melon, family Cucurbitaceae (Cucumis melo, Inodorus group) is a type of melon widely available in the Northern Hemisphere. It has a blotched green peel after which it is named (Piel De Sapo translates as "toad skin"). A closely related melon with the same shape but with yellow peel is known as "Amarillo" or Canary melon. Piel de Sapo originated in Spain where it is widely grown - about 30,000 hectares are cultivated annually. La Mancha is the main region in Spain producing this type with 12,000 hectares. They are grown outdoors with plantings starting in May and running until June. Production starts in mid-July and ends in September. Another important growing area is Murcia that has specialized in growing early crops. There, they plant mainly in Mid March and harvest from mid-June to mid-July.

It has white sweet-tasting flesh and flourishes in slightly acidic or neutral soil. Large quantities are imported into Europe. It is grown in Brazil and Central America to supply produce to Spain during autumn, winter, and spring. The most popular cultivar in the last ten years in the main producing region (La Mancha) has been a hybrid named Sancho bred by the seedhouse Syngenta. Many open-pollinated cultivars were grown in Spain until recently but hybrids have replaced them almost entirely as they offer to the growers higher yields and better resistance to disease. Old cultivars have been preserved in germplasm collections.