This plant is medicinal plant 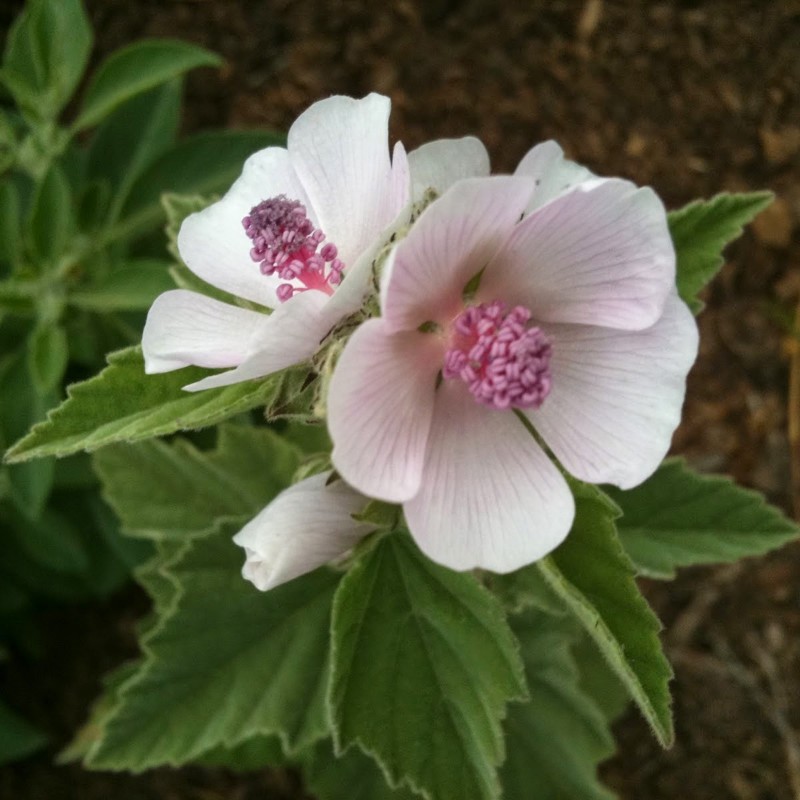 Althaea officinalis, or marsh-mallow, is a perennial species indigenous to Europe, Western Asia, and North Africa, which is used in herbalism and as an ornamental plant. A confection made from the root since ancient Egyptian times evolved into today's marshmallow treat, but most modern

Althaea officinalis, or marsh-mallow, is a perennial species indigenous to Europe, Western Asia, and North Africa, which is used in herbalism and as an ornamental plant. A confection made from the root since ancient Egyptian times evolved into today's marshmallow treat, but most modern marshmallow treats no longer contain any marsh-mallow root.

The stems, which die down in the autumn, typically grow 90 to 120 cm (3 to 4 ft), but can reach 2.0 m (6+1⁄2 ft) and put out only a few lateral branches.[5] The leaves are shortly petioled, roundish, ovate-cordate, 50 to 75 mm (2 to 3 in) long, and about 30 mm (1+1⁄4 in) broad, entire or three to five lobed, irregularly toothed at the margin, and thick. They are soft and velvety on both sides, due to a dense covering of stellate hairs. The flowers are shaped like those of the common mallow, but are smaller and of a pale colour, and are either axillary, or in panicles, more often the latter.

The stamens are united into a tube, the anthers, kidney-shaped and one-celled. The flowers are in bloom during August and September, and are followed, as in other species of this order, by the flat, round fruit which are popularly called "cheeses".

The common mallow is frequently called "marsh mallow" in colloquial terms, but the true marsh mallow is distinguished from all the other mallows growing in Great Britain by the numerous divisions of the outer calyx (six to nine cleft), by the hoary down which thickly clothes the stems and foliage, and by the numerous panicles of blush-coloured flowers, paler than the common mallow. The roots are perennial, thick, long and tapering, very tough and pliant, whitish yellow outside, white and fibrous within.

Most of the mallows have been used as food, and are mentioned by early classic writers with this connection. Mallow was an edible vegetable among the Romans; a dish of marsh mallow was one of their delicacies. Prospero Alpini stated in 1592 that a plant of the mallow kind was eaten by the Egyptians. Many of the poorer inhabitants of Syria subsisted for weeks on herbs, of which marshmallow is one of the most common.[citation needed] When boiled first and fried with onions and butter, the roots are said to form a palatable dish,[6] and in times of scarcity consequent upon the failure of the crops, this plant, which grows there in great abundance, is collected heavily as a foodstuff.

The leaves, flowers and the root of A. officinalis (marshmallow) have been used in traditional herbal medicine. This use is reflected in the name of the genus, which comes from the Greek ἄλθειν (althein), meaning "to heal."

Marshmallow was traditionally used as relief for irritation of mucous membranes,[8] including use as a gargle for mouth and throat ulcers and gastric ulcers.[9] In Russia, the root syrup is sold without a prescription by pharmacies, with intent to treat minor respiratory ailments.

The young leaves can be cooked. The flower buds can be pickled.[11] The roots can be peeled, sliced, boiled and sweetened to make candy. Water used to boil any part of the plant can be used as an egg white substitute.