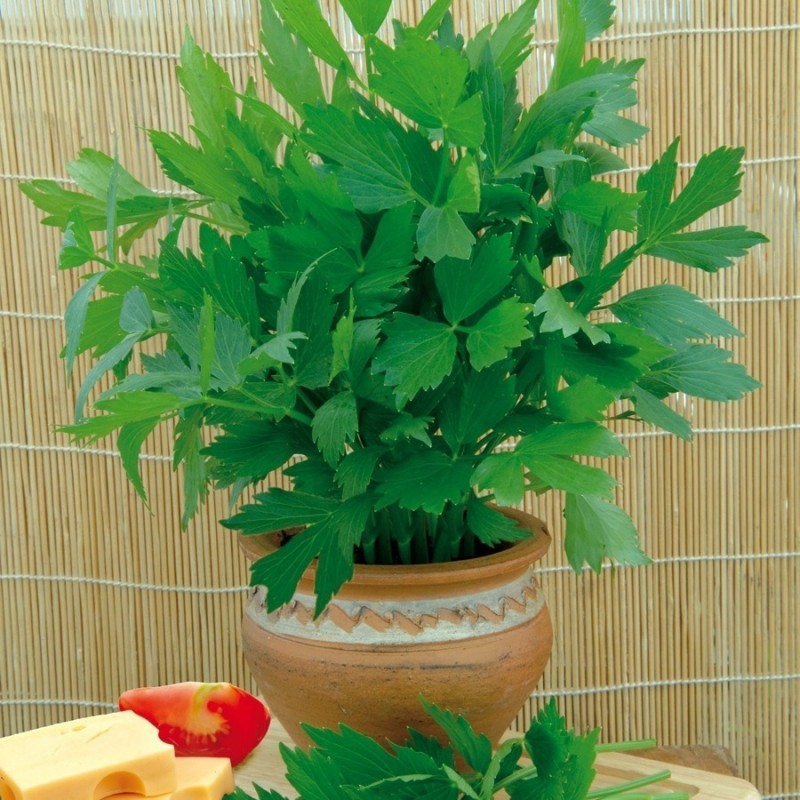 Lovage is an erect, herbaceous, perennial plant growing to 1.8–2.5 m (5.9–8.2 ft) tall, with a basal rosette of leaves and stems with further leaves, the flowers being produced in umbels at the top of the stems. The stems and leaves are shiny glabrous green to yellow-green and smell of lime when crushed. The larger basal leaves are up to 70 cm (28 in) long, tripinnate, with broad triangular to rhomboidal, acutely pointed leaflets with a few marginal teeth; the stem leaves are smaller, and less divided with few leaflets. The flowers are yellow to greenish-yellow, 2–3 mm (0.079–0.118 in) diameter, produced in globose umbels up to 10–15 cm (3.9–5.9 in) diameter; flowering is in late spring. The fruit is a dry two-parted schizocarp 4–7 mm (0.16–0.28 in) long, mature in autumn.

The leaves can be used in salads, or to make soup or season broths, and the roots can be eaten as a vegetable or grated for use in salads. Its flavor and smell is somewhat similar to celery. The seeds can be used as a spice, similar to fennel seeds. In the UK, an alcoholic lovage cordial is traditionally mixed with brandy in the ratio of 2:1 as a winter drink. In Romania, the leaves are the preferred seasoning for the various local broths, much more so than parsley or dill.

The roots, which contain heavy, volatile oil, are used as a mild aquaretic. Lovage root contains furanocoumarins which can lead to photosensitivity.

The name "lovage" is from "love-ache", ache is a medieval name for parsley; this is a folk-etymological corruption of the older French name levesche, from late Latin levisticum, in turn thought to be a corruption of the earlier Latin ligusticum, "of Liguria" (northwest Italy), where the herb was grown extensively.[9] In modern botanical usage, both Latin forms are now used for different (but closely related) genera, with Levisticum for (culinary) lovage, and Ligusticum for Scots lovage, a similar species from northern Europe, and for related species.[4][9] In Germany and the Netherlands, one of the common names of lovage is Maggikraut (German) or Maggiplant (Dutch) because the plant's taste is reminiscent of Maggi soup seasoning[citation needed]; however, the classic German name is Liebstöckel, which is literally translated as "love stick".[10] In Northern Germany, it is sometimes called Beifuss. Italian levistico or sedano di monte, French livèche, Romanian leuştean, Hungarian lestyán, Russian любисток lyubeestok, etc. In Bulgaria, it is known as девесил deveseel. The Czech name is libeček, and the Polish name is lubczyk, both meaning "love herb". The name in Swedish is libbsticka, Norwegian løpstikke. The Croatian name for this plant is ljupčac or vegeta (named after a well-known Croatian meal seasoning similar to Maggi); the Finnish name is liperi or lipstikka, the former meaning "preacher's collar", because in old ages the plant was cultivated in monasteries or in rectories, while the latter is from Swedish, which is the second language spoken in Finland.