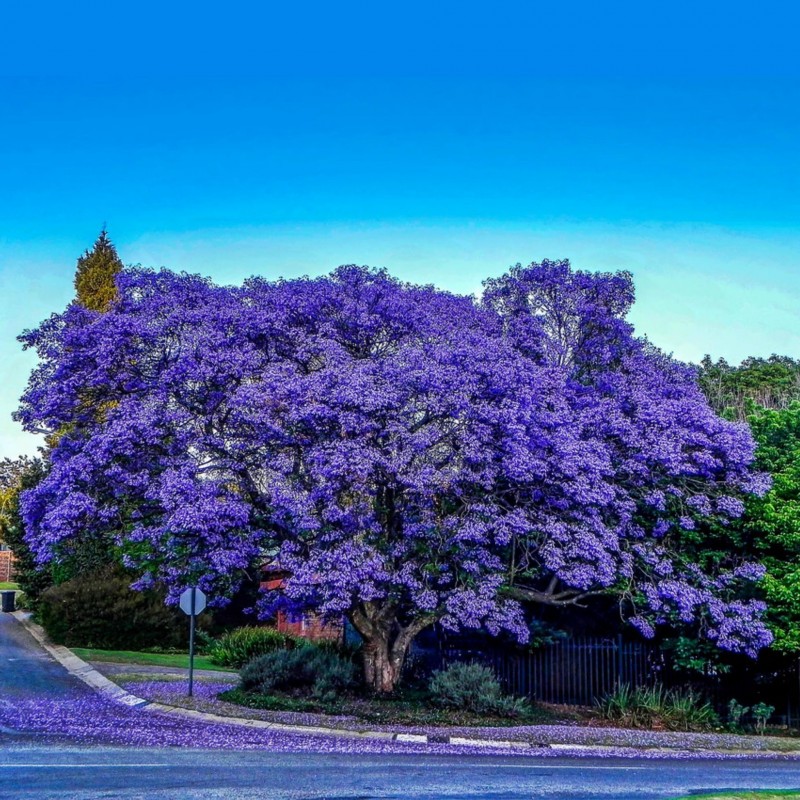 Jacaranda mimosifolia is a sub-tropical tree native to south-central South America that has been widely planted elsewhere because of its beautiful and long-lasting blue flowers. It is also known as jacaranda,

Jacaranda mimosifolia is a sub-tropical tree native to south-central South America that has been widely planted elsewhere because of its beautiful and long-lasting blue flowers. It is also known as jacaranda, blue jacaranda, black poui, or as the fern tree. Older sources give it the systematic name Jacaranda acutifolia, but it is nowadays more usually classified as Jacaranda mimosifolia. In scientific usage, the name "Jacaranda" refers to the genus Jacaranda, which has many other members, but in horticultural and everyday usage, it nearly always means the blue jacaranda.

The blue jacaranda has been cultivated in almost every part of the world where there is no risk of frost; established trees can however tolerate brief spells of temperatures down to around −7 °C (19 °F). In the USA, 48 km (30 mi) east of Los Angeles where winter temps can dip to −12 °C (10 °F) for short several-hour periods, the mature tree survives with little or no visible damage.

In the United States, it grows in parts of Oregon, California, Nevada, Arizona, Texas, and Florida, the Mediterranean coast of Spain, in southern Portugal (very noticeably in Lisbon), southern Italy (in Naples and Cagliari it's quite easy to come across beautiful specimens). It was introduced to Cape Town by Baron von Ludwig in about 1829. It is regarded as an invasive species in parts of South Africa and Queensland, Australia, the latter of which has had problems with the Blue Jacaranda preventing growth of native species. Lusaka, the capital of Zambia, and Harare, the capital of Zimbabwe, also see the growth of many Jacarandas.

The tree grows to a height of 5 to 15 m (16 to 49 ft). Its bark is thin and grey-brown in colour, smooth when the tree is young though it eventually becomes finely scaly. The twigs are slender and slightly zigzag; they are a light reddish-brown in colour. The flowers are up to 5 cm (2.0 in) long, and are grouped in 30 cm (12 in) panicles. They appear in spring and early summer, and last for up to two months. They are followed by woody seed pods, about 5 cm (2.0 in) in diameter, which contain numerous flat, winged seeds. The Blue Jacaranda is cultivated even in areas where it rarely blooms, for the sake of its large compound leaves. These are up to 45 cm (18 in) long and bi-pinnately compound, with leaflets little more than 1 cm (0.39 in) long. There is a white form available from nurseries.

Profuse flowering is regarded as magnificent by some and quite messy by others. The unusually shaped, tough pods, which are about 5.1 to 7.6 cm (2 to 3 in) across, are often gathered, cleaned and decorated for use on Christmas trees and in dried arrangements.

The wood is pale grey to whitish, straight-grained, relatively soft and knot-free. It dries without difficulty and is often used in its green or wet state for turnery and bowl carving.