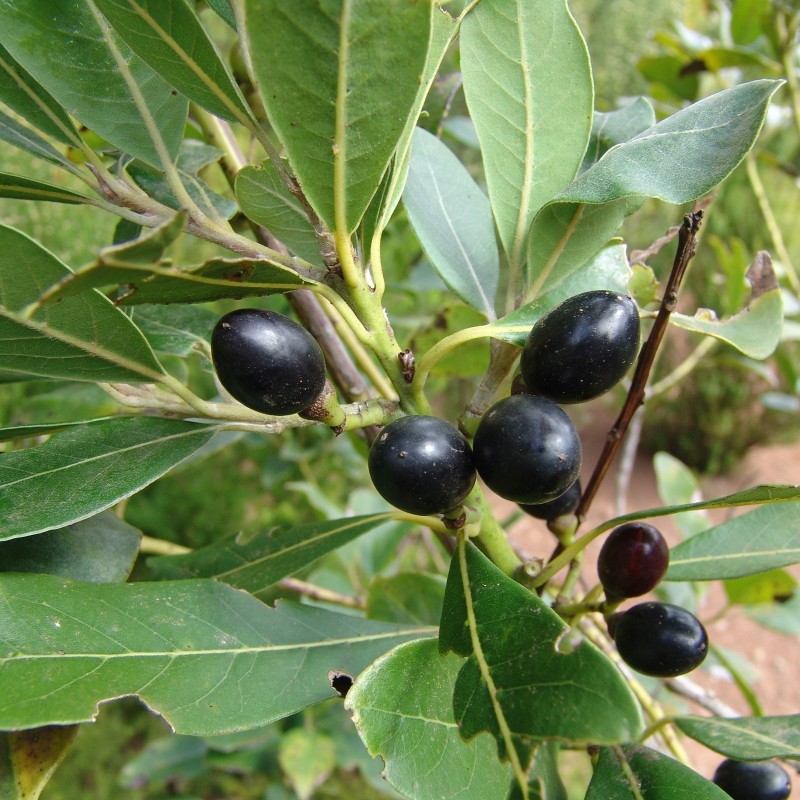 We personally collect seeds every year in Bosnia and Herzegovina. The mother plants also withstood temperatures of -17 degrees Celsius.

It is an aromatic evergreen tree or large shrub with green, glossy leaves, native to the Mediterranean region. It is one of the plants used for bay leaf seasoning in cooking. Under the simpler name "laurel," Laurus nobilis figures prominently in classical Greek, Roman, and Biblical culture.

Worldwide, many other kinds of plants in diverse families are also called "bay" or "laurel," generally due to similarity of foliage or aroma to Laurus nobilis, and the full name is used for the California bay laurel (Umbellularia), also in the family Lauraceae.

The laurel is dioecious (unisexual), with male and female flowers on separate plants. Each flower is pale yellow-green, about 1 cm diameter, and they are borne in pairs beside a leaf. The leaves are 6–12 cm long and 2–4 cm broad, with an entire (untoothed) margin. On some leaves the margin undulates. The fruit is a small, shiny black berry (a drupe, actually) about 1 cm long.

A recent study found considerable genetic diversity within L. nobilis, and that L. azorica is not genetically or morphologically distinct.

Laurus nobilis is a widespread relic of the laurel forests that originally covered much of the Mediterranean Basin when the climate of the region was more humid. With the drying of the Mediterranean during the Pliocene era, the laurel forests gradually retreated, and were replaced by the more drought-tolerant sclerophyll plant communities familiar today. Most of the last remaining laurel forests around the Mediterranean are believed to have disappeared approximately ten thousand years ago, although some remnants still persist in the mountains of southern Turkey, northern Syria, southern Spain, north-central Portugal, northern Morocco, Canary Islands and in Madeira.

The most abundant essential oil found in laurel is cineole, also called eucalyptol.[2] The leaves contain about 1.3% essential oils (ol. lauri folii), consisting of 45% eucalyptol, 12% other terpenes, 3–4% sesquiterpenes, 3% methyleugenol, and other α- and β-pinenes, phellandrene, linalool, geraniol, and terpineol.

Both essential and fatty oils are present in the fruit. The fruit is pressed and water-extracted to obtain these products. The fruit contains up to 30% fatty oils and about 1% essential oils (terpenes, sesquiterpenes, alcohols, and ketones).

The plant is the source of several popular herbs and one spice used in a wide variety of recipes, particularly among Mediterranean cuisines.[2] Most commonly, the aromatic leaves are added whole to Italian pasta sauces. However, even when cooked, whole bay leaves can be sharp and abrasive enough to damage internal organs, so they are typically removed from dishes before serving, unless used as a simple garnish.[4] Whole bay leaves have a long shelf life of about one year, under normal temperature and humidity.[4] Bay leaves are used almost exclusively as flavor agents during the food preparation stage;

Ground bay leaves, however, can be ingested safely and are often used in soups and stocks, as well as being a common addition to a Bloody Mary.[4] Dried laurel berries and pressed leaf oil can both be used as robust spices, and even the wood can be burnt for strong smoke flavoring.

Aqueous extracts of bay laurel can also be used as astringents and even as a reasonable salve for open wounds.

In massage therapy, the essential oil of bay laurel is reputed to alleviate arthritis and rheumatism, while in aromatherapy, it is used to treat earaches and high blood pressure.[6][unreliable source?] A traditional folk remedy for rashes caused by poison ivy, poison oak, and stinging nettle is a poultice soaked in boiled bay leaves.

The chemical compound lauroside B isolated from Laurus nobilis is an inhibitor of human melanoma (skin cancer) cell proliferation at high concentrations.

Bay is widely cultivated as an ornamental plant in regions with Mediterranean or oceanic climates, and as a house plant or greenhouse plant in colder regions. It is used in topiary to create single erect stems with ball-shaped, box-shaped or twisted crowns; also for low hedges. Together with a gold form, L. nobilis 'Aurea',[9] it has gained the Royal Horticultural Society's Award of Garden Merit.[10]

Laurel oil is a main ingredient, and the distinguishing characteristic of Aleppo soap.

Bay laurel was used to fashion the laurel wreath of ancient Greece, a symbol of highest status. A wreath of bay laurels was given as the prize at the Pythian Games because the games were in honor of Apollo, and the laurel was one of his symbols.

Ovid tells the story in the Metamorphoses that laurel tree was first formed when the nymph Daphne was changed into a laurel tree because of Apollo's pursuit of her. Daphne is the Greek name for the tree.

The symbolism carried over to Roman culture, which held the laurel as a symbol of victory.[12] It is also the source of the words baccalaureate and poet laureate, as well as the expressions "assume the laurel" and "resting on one's laurels".

In the Bible, the laurel is often an emblem of prosperity and fame. In Christian tradition, it symbolizes the resurrection of Christ.

In Chinese folklore, there is a great laurel tree on the moon, and the Chinese name for the laurel, (Chinese: 月桂), literally translates to "moon-laurel". This is the subject of a story of Wu Gang, a man who aspired to immortality and neglected his work. When the deities discovered this, they sentenced Wu Gang to fell the laurel tree, whereupon he could join the ranks of the deities; however, since the laurel regenerated immediately when cut, it could never be felled. The phrase (Chinese: 吴刚伐木) ("Wu Gang chops the tree") is sometimes used to refer to endless toil, analogous to the legend of Sisyphus in Greek mythology

How to Germinate Bay Leaf Seeds

Commonly used in cooking and herbal treatments, bay leaves come from the bay laurel (Laurus nobilis) tree, which grows in U.S. Department of Agriculture hardiness zones 8 through 10. Attempting to grow bay laurel trees from seed can sometimes be frustrating as the seeds typically have a long germination period and may begin rotting before germination begins. It is possible to germinate bay laurel seeds, though it is recommended that you attempt to germinate multiple seeds at once to allow for germination failure and rotting in some of the seeds.

Soak the bay laurel seeds in warm water for 24 hours.

Prepare a seed tray with a layer of starting soil. The soil should be moist but not saturated and there should be no standing water present in the tray.

Spread the seeds out over the tray, pressing them lightly into the moistened soil. The seeds should be approximately two inches apart to allow them room to spread out once they begin developing roots and shoots.

Cover the seeds with a thin layer of compost, mulch or horticultural sand. Spray the contents of the tray lightly with warm water to dampen the seed covering. As with the initial moistening of the soil, you only want to dampen the covering and not saturate it.

Place the seed tray in an area where it will receive up to eight hours of sunlight per day and will maintain a temperature of about 70 degrees Fahrenheit.

Moisten the seed tray as needed. You want the soil and the seed covering to remain moist, though being slightly on the dry side will not harm the seeds. It is better for the seeds to germinate in an environment that is only slightly moist than one that is saturated since the latter condition encourages rotting.

Check the progress of the seeds weekly. It may take as few as 10 days or as long as six months for the bay laurel seeds to begin germinating. If you notice any seeds that have begun to rot, remove them from the tray.

Transplant germinated seeds to pots or to a prepared location outdoors once leaves begin to appear.

Bay laurel trees can grow as tall as 40 feet outdoors but can also be trained to grow in a pot through regular pruning. Many growers prune even outdoor trees to keep them around 10 feet tall for easy harvesting of leaves.

Bay leaves can have sharp edges and may cause mouth or throat injuries if chopped and put into food. Leaves used in cooking should be whole or contained in packets made of cheesecloth or other materials so that they can be removed before serving.